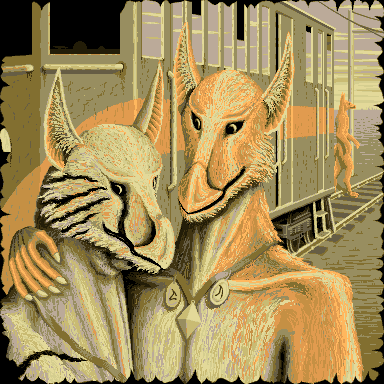 An image from (or for) the planned game Cheetaan Legacy, portraying one of the races (Shiriat / Cyat) at one of their typical environments.

The image itself is not bad, but a little sloppy. For one it is that for a comment from a friend I started to study a little more how railway equipment looks from different angles, and I got the bogies wrong, just too flat. The other part is that probably I could do much better now at the portraits. So this is rather just an experiment which in this form will never make into the game (If ever).

For the races the two share the same roots, although anatomically they differ: the Cyat is a large four-legged creature while the Shiriat being an anthropomorphic being builds their civilization. The Cyats for their large size and specialized body construction are capable of traveling long distances with load at 80-90 kilometers per hours, and would reach top speeds in extreme situations near 200. They are relied on instead of road vehicles which are unknown to them.

(Notes: Maybe later I will put up a few articles on these: creatures, behaviors and civilizations in general planned for these games. These are already very diverse, however I don't much want to expose too much before actual games would be released)