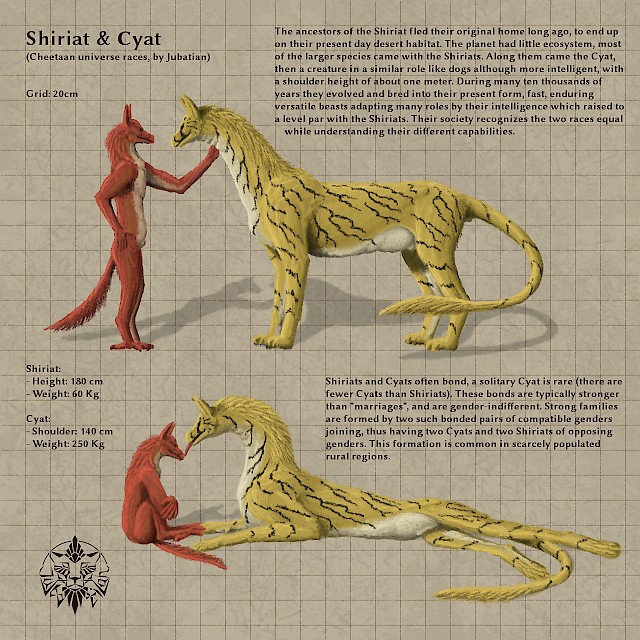 The Shiriat and the Cyat (the latter a bit "out of shape"). I like them the most among with the cheetaan in this world design. The Shiriat's shape is somewhat an anthropomorphic wolf with red fur, similar to the black wolves of the cheetaan. The Cyat is mostly a large cheetah, the long neck giving them a bit horse or even dragon-like (with their odd nostrils) character. The shapes of their heads are similar, the Cyat's being a little larger (but very small for the creature) and more bulky than the Shiriat's.

Some random bits on their world.

Like the Cheetaan, I imagine them as a "bioelectric" race (having no blood in the same sense like Earth animals, distributing energy directly by electricity within their body), however their capabilities are nothing that impressive. The are mortal with about four hundred Earth years lifespan, and doesn't have any better healing and recovery capabilities than Earth creatures. Their cells however are more compact, so for the same mass they are stronger, and have a brain comparable to human's in smaller volume.

Their society adapts "controlled evolution", having firm, established traditions on the ways of pairing for the purpose of giving birth. Old traditions mixed with science: they track their lineages to know their biological heritage, and have a good knowledge on the mechanics of their genes. There is no central authority governing this, rather their individual collectives enforce adhering it. They regard it a worse sin than murder to give birth from bad lineage, understanding it as torment for a lifetime. The related system of traditions and habits are complex, allowing most individuals to take part in giving birth at least once.

This system lengthened their lifespan among with making them resistant to conditions coming with age, and it also maintains their shape resembling to their ancient predatory form.

Their homeplanet is a desert with little water and few species forming the ecosystem. It isn't their original home: they fled many hundred thousand years before, and in the oncoming turmoils, they even lost the technologies necessary for interstellar travel, their ancient heritage only living in their legends, their religion.

The planet doesn't even have wildlife or foliage which would be fitting for food to them, when they arrived, they already consumed artificial food, which persisted. Their way of evolution eventually adapted them to that devolving their digestive tracts (they are unable to digest any kind of meat), and many old traits relating to feeding. They barely feel tastes. In their culture, very oddly to us (humans), elements relating food are scarce, cuisine is practically nonexistent. They almost treat it as merely "fuel". They however feel thirst and hunger.

Their intelligence is slightly below that of human, still, their capabilities match in need. Their civilization is older, very stable, their brain is adapted to it, and their world is simpler.

Their families and bonding differs to that known by human following the traditions related to "controlled evolution". As on the image, typically Cyats bond with Shiriats, and especially in cities, there are many other pairings going beyond friendship without the intent of giving birth, while those pairings which end up in the conception of a child are comparatively rather weak.

The rural regions hold the tradition of having a family of four (as described on the image), where bonds and the intent of giving birth join.

Children rarely stay with their parents for long. It is expected that they leave soon (before ten Earth years age) to see the world, to try themselves, gaining knowledge and respect (it is not unlike what was common in the medieval age in cities). There are no elementary schools, rather it is expected from all of them to be well-versed in general knowledge, and be willing to pass it down. It is typical that children pick up knowledge in guilds, the places they join to work at.

Now this may appear a cruel world, like what, child labor? Yes, at them it works like that, but unlike in the medieval and early capitalist era, they don't send down children in mines or stuff like that. They respect them, and give them tasks which they can perform (not unlike probably a sane medieval guildmaster did), and only so much what can be reasonably expected from them. They also take time to have fun, to play, involving those children: Shiriats and Cyats of all ages like to play, and it is a common strong belief in general that they were given life to enjoy it (embedded in their tradition, religion, and habits).

So from very young age the children get an impression of the mechanics of their societies, their world, as they are even encouraged to occasionally go on, travel, see other cities and places. It is very rare that one of them stays put, and it is absolutely not respected to be so.

(Note: If you look at the top image for long enought with half an eye closed, it may appear 3D)