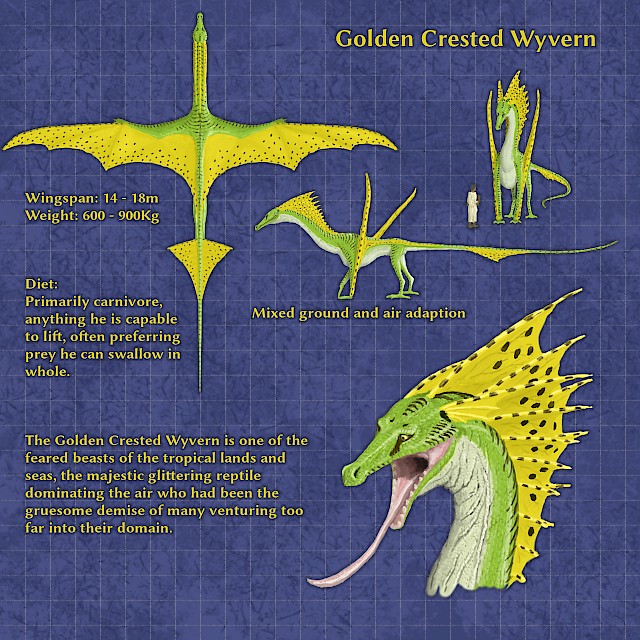 Golden Crested Wyvern reference sheet, for a wyvern specie I used in a few short stories, maybe something to be released later, however this is also the golden wyvern depicted in Outbreak to the Sky, although evolved compared how I imagined them in that novel, pushing toward making them more slender, lithe bony creatures easily caught by the winds, gracefully soaring with ease.

Then of course the dragon of Don't tease the fat dragon is also him, I just have a tendency to play this especially on them, normally sleek, elegant beasts of the skies.

Drawing actual reptiles is difficult. I used primarily lace monitors as guide, their skin should mostly resemble to that of those beautiful lizards, the shape of the snout is of course crocodilian for a reason. Hint: You as a human being are just under the bar for their preferred type of prey!

Their habitat and diet is mixed, both land and sea, when competing with the more sturdy brass wyverns they often tend to rely on their superior soaring to reach areas unsuitable for those, the sea, fishing being one of their notable opportunities for a safe retreat. Their hind feet are webbed to assist them launching from the surface of water, but their long neck and snout also supports this adaption, enhancing their reach underwater.

However they are also found in tropical forests and obscure regions not very well suited for the brass wyverns who demand wide open land, as contrary to them, they can soar with ease to spot the right opportunities even when they are scarce and far between.

Their hunting style on land varies, smaller prey they may snatch in low sweeps, bigger ones they prefer to either slam or even pick up to lift and drop, to break their bones. Humans caught by them on opportunity often meet this fate as they are sufficiently intelligent to realize they can potentially be more harmful to them than they look like.

Their insulation and thermoregulation are below average, they are capable to heat themselves (semi-warmblood), however like reptiles, are mostly limited to warm climates and seasons.

Humankind, in regions where they are rare and only occasional, slowly develops means to interact with them, eventually becoming able to ride these powerful beasts into battle, however unintentionally as a consequence they also uplift them generation by generation. The developing intelligence both makes them much more efficient assets at war, and also more dangerous as they start forming their own ideas.

The intelligent dragon is a beast to rightfully fear. He knows his capabilities, and yours. He won't lift or crush you any more if he set his mind on it. He knows how to disarm one proper, and takes his time. To enjoy you as his meal, exactly the way he prefers it.

So one quite controversial beast, again, elegant and majestic, yet potentially horrific and gruesome for those unfortunate to meet that fate.