The 15th March is special in Hungary, we would be celebrating the anniversary of an important uprising, one against the Hapsburg dynasty demanding more autonomy for our country within their empire. It was the pinnacle of the age of reformation, but one which later got usurped like all the other movements happening in that year. Then, today... It seems like people here lost all their sanity siding with an oppressive government and very few caring of any movement which tries any reformation.

This day there were several protests, one in particular for the reformation of the education system. In short, the government is centralizing it, creating and maintaining systems which would govern it from the centre without caring about individual institutions, without caring about the people's opinions. This included such outrageous laws like abolishing all the existing educational books to enforce one set released by a central agency, and they didn't even complete the books by the year when the law demanded using them. Teachers can not voice their opinions in schools as they may lose their jobs. Sometimes even the basic needs are lacking, in remote villages the buildings themselves may have became unfit and insanitary for the children.

The most recent reformation movement started isolating itself from all the parties, they wanted to communicate with the government's appropriate ministers, discussing the problems suggesting solutions, but they were dismissed without any response. There came the protests, and the government's sole response was discrediting them associating them with parties and anything what they could pass for their supporters to see them as a vile enemy trying to sabotage the nation.

This happens in just about every field (except sports and notably football which is the prime minister's favourite), a very notable one is healthcare which is truly in ruins and people are actually dying due to its basic incapabilities.

On the 15th we get less than twenty thousands protesting in total on every event organized by movements opposing the party. 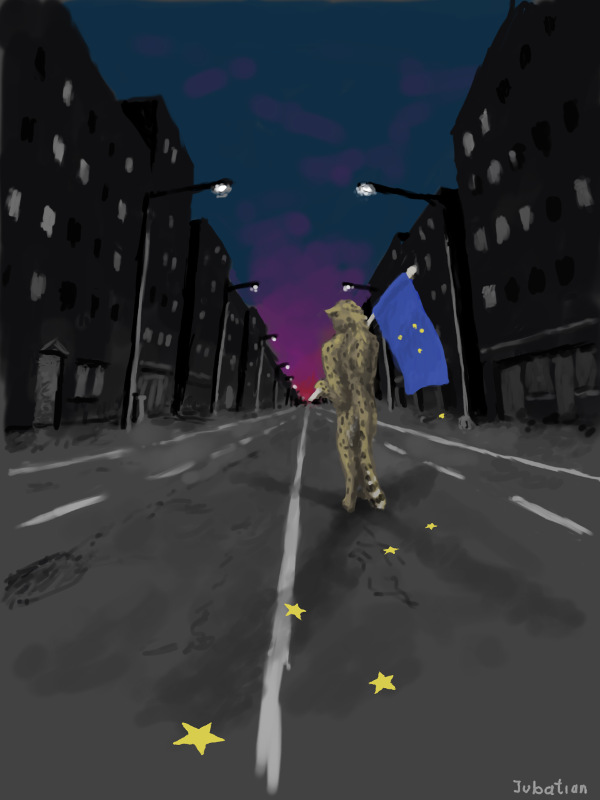 This was about how I felt

I was standing there stupidly waving around with a flag of the European Union behind the small crowd assembling in front of the auditorium where the protest for the reformation of education would start. There were sure a lot of students and supporters out, but still, it was a relatively small crowd.

The same time the governing party assembled more than a hundred thousand. Even though they gave free bus ride to everyone they could collect, and supposedly maybe threaten, that's a large crowd, and I can't believe that it was actually small in actual supporters. Still, despite all the dirty mess they have stable roughly two millions supporters, about one quarter of those who are eligible for voting in this country (and by the election system which they purposely set up for their benefit, they will win).

The prime minister on his speech, on this day when our ancestors rose against the oppressive power (of the Hapsburg dynasty) seeking for reformation (then still hoping a peaceful solution), threatened all the parties opposing his and all their supporters that revenge will come after the elections (on the 8th April).

Those people are blind. Show them a substitute for Emmanuel Goldstein (of George Orwell's 1984), and they would march off a cliff.

But if the other side, the opposition, people who would want to reform, who believe in the ideals of the united Europe, that we can be strong in peace and cooperation are lacking, then there will be no change here. And this way, with this party in power this country is a wreckage, dumping a large share of tax money into keeping up the fear and hatred in their supporters, for whatever enemy they can concoct. Of all things lately it was, of all things, the United Nations. Why? Why?!

I seriously don't want to live here any more.